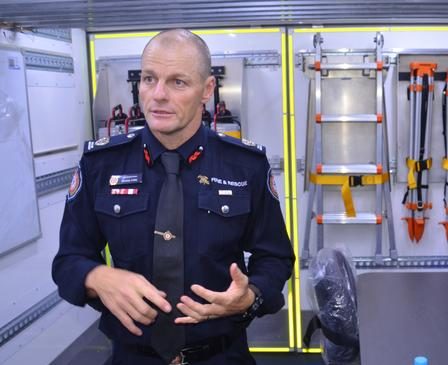 After 26 years (and counting) with the Queensland Fire and Rescue Service (QFES), Chief Superintendent for Queensland’s Northern Region Michael O’Neil knows a thing or two about crisis management.  But where more familiar Queensland crises like fire and flood call for emergency responses that push people together, COVID-19 required a fast and thorough response even while forcing people apart.

Enrolments are now open for our Regional Emerging Leaders Program.  Find out more, or contact us.

“From a leadership perspective, it was a little bit challenging,” says the ECA Alumnus.  “Not having that one-on-one or that face-to-face contact proved to be a large learning experience.”

COVID-19 has had heartbreaking and catastrophic consequences for many industries.  But for many more organisations, like the public service, the challenge is continuing to deliver their core services through an added workload of pandemic response and recovery, coupled with the challenge of an isolated workforce at risk of disengagement.

For Michael, leadership through COVID-19 has been a deep focus on staff engagement, facilitated by a leaning on (and a leaning in) to technology and digital platforms that aren’t new but proved essential in maintaining connection and engagement with a remote workforce.

“We had to lean on technology, we had to lean on fit systems,” he says.  “And that was a large learning for everyone in using things like (Microsoft) Teams and Skype and all sorts of things to ensure that we stay in contact, and more importantly, stay engaged with our workforce.”

An initiative to foster staff engagement was a dress up challenge which gradually grew from one or two people dressing up to a full team of 15 people on a Microsoft Teams meeting.

“I think it actually made the team become more united, because we were able to have a bit of a laugh and giggle with each other,” says Michael.

While remote collaboration presented a challenge and required an adjustment, bringing an element of fun through something simple like the dress up challenge yielded surprising benefits that demonstrated the value of diversity and openness for team communications and collaboration.

“It certainly opened us up to more of a team environment because we started to see some personality (outside of the office environment),” he says.  QFES is an organisation with a uniform and the simple act of dressing up enabled colleagues to learn more about each other’s styles and preferences.  “I think it’s actually improved the teamwork,” says Michael.  “It’s opened people up to more interaction and some of the quieter personalities are certainly more open now.”

A forced transition to a remote workforce has enabled a deeper shift for Michael; an adjustment to his previous understanding of what flexibility could look like, which recognises the benefits that come from flexibility and trust between management and staff.

“Working remotely really made me trust my staff to know that the work was going to get done,” he says.  “So it really made me look at the way that I deal with my staff on a day-to-day basis.  Because it might mean communicate in a different way, trust them more.”

This outcome is not just a personal leadership reflection for Michael.  A survey has found that staff have enjoyed the trust and flexibility to do their jobs outside of the traditional, supervised office environment.

“As much as people were interested to get back in the workplace, to that face-to-face contact, they are still quite confident and quite keen to have that flexibility and the ability to work from home,” he says, citing the ongoing benefits for focused, uninterrupted time that working from home offers, even as some organisations have commenced staged returns to office-based work.

“And the flip side of that too, is obviously the impact on office space, on travel, on the ability to get a better work life balance, because we are able to switch on the computer at eight o’clock at night when the kids are in bed and do some work for a couple of hours,” he says.  “So I think moving forward, it’s really opened our eyes (at QFES) on how the office environment was prior (to COVID-19).”

One of the key explorations in Executive Challenge Academy’s Executive and Emerging Leaders programs is how we can lead well through crisis.  The programs’ key teachings are the importance of collaboration between leaders, especially across different sectors and industries.

Michael is clear that this focus on cross sector collaboration, and the network of professional alumni it enables, has had a lasting impact on his leadership journey.

“To be honest, I wouldn’t have ever even thought of engaging with (other sectors) prior to the Executive Challenge,” he says.  “It just opened my eyes to the fact that you can look outside of your organisation for help or for guidance and support because most people from other industries are having the same problems or have had the same sort of risk.”

The forced disruption of COVID-19 continues to test our old ways of doing things, accelerating change and progression even in our most traditional institutions.  But it also demands we seize the opportunity to collaborate with others and transform the way we do business and serve the community.

“I think it has really forced people to grow to look for different ways of achieving the same outcome,” says Michael.  “I think the pandemic really might be how leaders think fast and move fast in regards to change. I’m hoping it has opened people’s eyes to how we can do our business in the future and make the world better.”

Enrolments are now open for our Regional Emerging Leaders Program.  Find out more, or contact us.

Michael O’Neil is the Chief Superintendent – Northern Region at Queensland Fire and Emergency Services. Michael has worked with QFES since September 1994, with his first posting to Townsville. Five years after starting as a recruit, he was promoted to the rank of Station Officer and continued to move through the ranks of Inspector, Superintendent and most recently, Chief Superintendent.

Michael was identified as a future leader for the organisation and has been involved in many different development opportunities.  He was sent to Atlanta in the United States as part of an Urban Search and Rescue team, participating in an International Exercise covering command and control.  He’s also been involved in the QFES Transform program – supporting the organisational leaders to move into more contemporary leadership styles.

Michael has also had experience as a State Swift Water Rescue Instructor and he’s been deployed to all major disasters across Queensland since Cyclone Larry in 2006.  The last few major events have seen him move from operator to leadership and management skills.  He was awarded a Commissioner’s Citation for his efforts as Incident Controller, when deployed to the Bundaberg floods in 2013.

In addition, Michael has participated in Executive Challenge Academy programs as a leader, committed to his own ongoing growth and learning, but also to the ongoing development of others.  In handing forward to others, he has built local networks of senior leaders, committed to supporting future leaders.

Photograph: From the Townsville Bulletin

Archersfield’s team building, strategic planning and professional coaching have assisted our network of organisations to become more efficient, effective, and focused on delivering great services for our clients and communities.

Ready to shape the future?