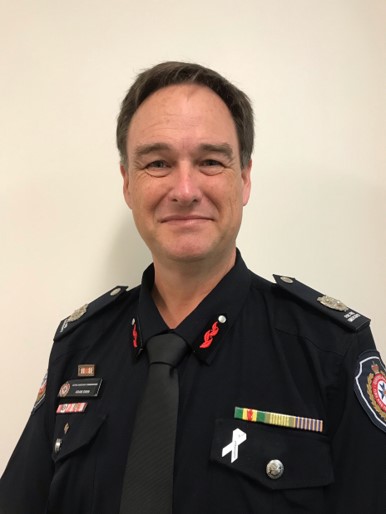 ECA Alumni Adam Gwin is the Acting Assistant Commissioner for the Queensland Fire and Emergency Services’ (QFES) Far Northern Region.  The 26-year QFES veteran has been the commander of operations through many natural disasters, including cyclones, bush fires, and floods.  In 2020, his crisis leadership took on a global pandemic.

Listen now to Adam Gwin in conversation on the final episode in this first season of the Leaders Matter podcast.

Contact us to find out more about our upcoming courses, including our regional-focused leadership programs and alumni projects.

With years of experience responding to and leading through crises, Adam is bred to go into operation crisis mode.  But the COVID-19 crisis was a very different beast and Adam focused on keeping his personnel grounded.

“It was about keeping the friends and families grounded, where it’s quite easy to get caught up in the hype of it,” says Adam.  “And I am very blessed that my family have lived and breathed my working career, so they are very grounded in their own right.  In the workplace, we’ve also had to try and keep grounded, remaining calm and collected and cool.”

Adam doesn’t see leadership learnings as necessarily Eureka or ‘light bulb’ moments, but rather small learnings that come each day, as long as one remains flexible, agile and pragmatic.

“Probably the biggest learning for me was to slow down and have that realisation that if we didn’t temper our reactions to it, then we would probably be a casualty,” says Adam.  “Not because of the virus itself but as a result of (its impact).

Far North Queensland is an enormous region, spanning more than 270,000 square kilometres, with diverse peoples and places.  It called for a locally-focused response.

“We live in one of the most unique places of Australia, if not the world, where we’re looking after the top end of Australia,” says Adam.   “We had a whole different array of biosecurity restrictions and limitations for Indigenous communities. We had the Torres Straits area which borders on Papua New Guinea. So we had that international component.  And there was a huge impact on the local and the social environment with regards to tourism, particularly from Asia.”

In terms of policy and system leadership emerging from COVID-19, Adam believes locally focused solutions are the most effective.

“It’s good to have an overarching concept, which might give us an outcome, but I think there needs to be credence given to the local level on how to achieve that outcome,” says Adam.  “Each community has its own needs and its own wants. We certainly promote local solutions for local issues.”

Community connection and resilience emerging out of the COVID-19 crisis has particularly struck Adam.

“In the afternoons driving down my street, people were sitting outside on their front lawns and having a conversation,” says Adam.  “It is something that took me back to my childhood and I thought, ‘Wow, this is fantastic.’  There was social distancing, they were remaining within their grounds. But they were sitting on their chairs, having a cup of tea or a glass of water or cold beer and having a conversation across the road.  They were just spending time again with each other. I just think that has been a wonderful outcome out of such an interesting environment.”

Adam joined the Executive Challenge Academy several years ago, hoping to learn more about political acumen and how it drives and impacts his own profession but also other sectors like the social and not-for-profit environments.  From a desire to flesh out his leadership theory, Adam’s involvement in ECA has evolved into a high level networking relationship.

“I’ve had absolutely wonderful opportunities through the Academy, going from being a learner to a supporter, taking people with me, working as a mentor for my staff, sharing the experiences with them, and encouraging others to be part of it, says Adam.  “For me, the greatest asset are the networks that I’ve gained through the Academy. They are absolutely invaluable.”

Adam has advice for emerging leaders who are leading through crises or even just through day-to-day circumstances.

“Take the opportunity to slow down,” says Adam.  “Ask yourself why. Why are we doing this? What benefit is it for.   Investigate your biases.  Slow down and take the time to evaluate.”

Listen now to Adam Gwin in conversation on the final episode in this first season of the Leaders Matter podcast.

Contact us to find out more about our upcoming courses, including our regional-focused leadership programs and alumni projects.

Adam began his career with QFES more than 26 years ago, working through a rank based system to his substantive position as Chief Superintendent, overseeing QFES operations in the Far North Queensland region spanning more than 270,000 square kilometres.

His career highlights include being awarded the Australian Fire Service Medal in recognition of passion and commitment to firefighting, and building community resilience with community stakeholders. He’s also been the commander of operations through many natural disasters, including cyclones, bush fires, and floods, as well as the 2018 Commonwealth Games events in Far North Queensland.

Adam has also been involved in leading an organisational cultural change across several regions and including about 8000 staff. He’s developed partnerships with 17 local indigenous communities, focused on embracing culture and people and creating a sustainable future.

In addition, Adam has been involved in youth development with the introduction of emergency cadet groups in rural and remote communities.

Adam is passionate about implementing place based initiatives to find local solutions to local issues, and his goal is to embed QFES as a community hub, bringing together government, private and social enterprise as a cohesive collaborative entity.

Archersfield’s team building, strategic planning and professional coaching have assisted our network of organisations to become more efficient, effective, and focused on delivering great services for our clients and communities.

Ready to shape the future?